Remembering the grace on that night...

Six years ago today was a bittersweet time for Jonathan and I.  Only four short days after our dating bliss had begun, we were involved in a serious car accident--one that forever changed our lives.

On December 18, 2002, Jonathan had just picked me up at my house after his hitting practice.  After bringing me roses we embarked on our journey to pick up his brother and to attend a Sunday School Christmas party.  Jonathan entered into the curve and lost control of his 2000 Trooper.  We flipped four times head-over-end and the car landed on my side (the passenger side).  I remained conscious and the only pain I can remember was my hip.  Jonathan was unconscious.  His head was resting on my shoulder and blood was coming from his nose.  We were rushed to the WakeMed in Raleigh, to discover that Jonathan had two small tears on his brain.  He went to ICU and I went to an ER room where I received 7 staples in my head.  Things with Jonathan were touch and go for a while.  The doctors were not sure what they needed to do, but emergency brain surgery was looking like the only option.  When they reassessed Jonathan, his tears had repaired themselves and the bleeding had stopped.  Only 4 days later he came home with no serious side affects sustaining from such a head injury.
The providence of the Lord is profound.  (and even that sounds like such an understatement).  I marvel at the grace and mercy that God poured out in our lives both physically and spiritually during this season of our lives.  I had witnessed God's healing power first hand, and saw his transforming power to speak light into our dark hearts.  We will forever be grateful for such a wreck which the Lord purposed for our good and His glory.
Here we are six years later--holding our delightful baby girl and loving marriage. 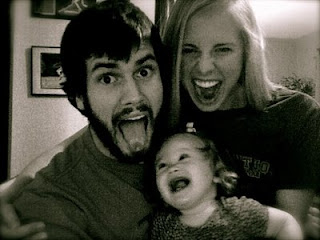 ... and you are such an adorable family at that. I never knew about this wreck but I'm so sorry to hear what had happened. I admire you so much for always finding the positive in good and bad events. I love ya, girl!