a walk down memory lane

Six years ago today, Jonathan asked me to be his girlfriend. We were both in Myrtle Beach on December 14, 2002. I was on an annual family trip, and Jon was at a baseball showcase. We were completely smitten prior to the trip, which made me even more excited to know that my crush would be in the same "romantic" town as me. He came by and picked me up at my hotel, and we went walking on the beach. On that brisk December night, he sweetly wrote, "Will you be my girlfriend?" in the sand. Who could resist such a guy? Of course, I said yes, and we kissed under that bright, full moon. Even then, barely a junior in high school, I knew I could spend the rest of my life with him. (okay, or maybe i was just being a typical teenage girl!)

It is crazy to think we go back even further than that day (my freshman year). And even more crazy to think I married that charming boy 5 years later. December is special to me because this was the time my husband asked me to be his girlfriend. What happened four days later, makes it even more remarkable...but I'll save that for another post. :) In the meantime, here are some oldie-goldie pictures of us at prom.. 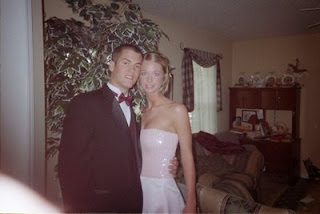 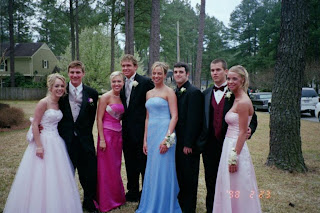 love the pictures! I've been to Myrtle Beach once... cute story.

Ohh, that's too cute. Now, I couldn't post my old prom picture. It's with Matthew...but NOT the Matt I married (I dated a guy name Matthew)! LOL

I love your blog. You're so funny! Take care.