Towards the end of Elizabeth's preschool year, I would drop Elizabeth off at preschool and take Hannah and Micah by Desiring God to see Jonathan at work. After a few times of doing it, Hannah would ask if we could go see Daddy at "daddy's house." It was all innocent until Mother's Day 2012.

We had spent the morning out at a park and eating at my favorite restaurant, Texas Roadhose. Later that day, Jon was trying to study for his Hebrew final. I needed to run to Target and decided to take Hannah with me.

There were moms there with the entire family and some moms there who were grocery shopping in quiet bliss by themselves. And there was me walking hand in hand with my sweet girl into Target. We reached the carts. I broke our cart away from the others. And picked my sweet girl up to ride in the back of the cart.

Gravity is a strange thing. Somewhere between the ground and being placed in the back of the cart, my precious, sweet little girl flung herself into a terrible-two hysteria.

Which would have been fine if it would have only been crying. But no. It involved her crying AND screaming at the top of her lungs, "I WANNNNAAA GO TO MY DADDDYYY'S HOUSEEE," over and over again. And it didn't end after a few minutes. It lasted my entire trip to Target.

I was pretty mortified, but one thing that has been a sweet gift in motherhood has been a sense of humor. I came home frazzled but laughing at how ridiculous that scene must of looked as I replayed it to Jonathan.

That next morning, Hannah asked to go to Daddy's house again, when Elizabeth looked at her in all seriousness and asked, "What does your Daddy's house look like?" Stop. It!

Yep, and it was there in that moment I gained some perspective: that Target run could have been a whole lot worse. 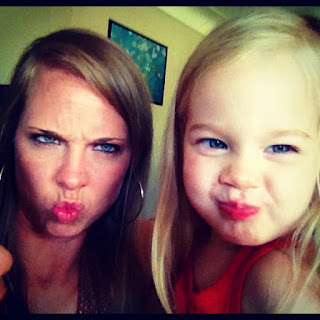 After an embarrassing day at the coffee shop with my just-turned-3-year-old throwing a huge fit, this was exactly what encouraged me!

Feel reassured, I've been there and done that, girl!