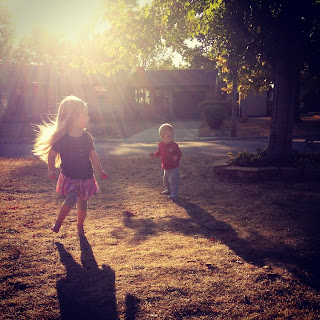 Oh, my sweet Hannah Kate! I just love her. Every ounce of her personality and every thread of her hair. She is my sweet middle baby, who gets upset weekly we didn't name her Minnie.

Poor thing was sick yesterday and last night was rough. Rough as in, she woke up four times with a fever and screaming in a panic, telling us something about a beast and asking us to put her boogers in her dresser drawer. She is so hilarious and incredibly unpredictable. I love that about her. Most of the time. :)

Here are some videos of my two favorite words that I hope she never outgrows: Henry and George.

And yet, I know she will one day outgrow saying these words this way. She won't be upset that I didn't name her Minnie. And she won't be talking about hiding boogers in drawers.

So I'm trying to soak it in as much as I can. Even when they happen at the inconvenient times like four in the morning. I'll rant with her that I should have thought of the name Minnie the day she was born, and I'll name every boy character in stories I make up Henry George.

Because next week, Lord willing, I'll kiss my two-year-old for the last time and I'll wake up my three-year-old on Thursday morning, and I'll know that these times are going by way too fast.

Love the new blog set up! And what a great shot of you and Jonathon! I LOVE the videos an one-liners your girls produce. Funny stuff.